I have an interactive command-line daemon (in Ruby) that I needed to receive push events via WebSockets from an ActionCable-enabled Rails application. I eventually succeeded, but doing so required diving into the weeds of ActionCable’s wire protocol since I didn’t want to rewrite my application in JavaScript solely to leverage the official client code.

Because I’m such a nice guy, I’ve extracted the code and released an easy-to-use client as the space_elevator gem. When combined with gems like thor, it makes writing bi-directional command line API clients a breeze. You can publish/subscribe to multiple channels simultaneously, and all in an event-driven manner. Check out the channel-y goodness and don’t forget to file any issues!

I just implemented a sample pairwise sequence aligner in JavaScript for a course. You can demo it at http://alignment.prestonlee.com, and grab the source code under an Apache 2 license at https://github.com/preston/alignment.

FYI to all the WordPress fans.. If you recently noticed that your links are getting hijacked by URLs pointing to “linkbucks.com”, try deleting your my-videotag plugin. I found this nastiness somehow embedded in the source code:

After a long period of inactivity I’ve updated the F/OSS ruby-prolog gem! It’s been updated for ruby 2.0.0, bundler, and minitest, and released as v1.0.1!

ruby-prolog allows you to solve complex logic problems on the fly using a dynamic, Prolog-like DSL. Basic use is encompassed by stating basic facts using your data, defining rules, and then asking questions. Why is this cool? Because ruby-prolog allows you to leave your normal object-oriented vortex on demand and step into the alternate reality of declarative languages.

You can use all these wonder things — it’s still Ruby after all — but they’re not needed, and mainly useful for getting data and results into/out of the interpreter. Prolog still tends to be favored heavily in artificial intelligence and theorem proving applications and is still relevant to computer science curricula as well, so I hope this updated release proves useful to the Ruby community.

Check out a simple ACL enforcement example or, for the daring, the ruby-prolog solution to the Tower’s of Hanoi problem!

Thinking of upgrading your vCenter Server Appliance from a 5.0 image to the 5.1 image using the official VMware upgrade process covered in the documentation? Don’t do it. It fails somehow. Every time.

Unexpected error during the upgrade process.

Yeah.. you read the right. Now both your old and new appliance images are b0rked, and you’ll need to restore from the vCenter 5.0 backup that you definitely made before attempting the upgrade. In private emails, VMware has acknowledged the issues and has advised to stick with 5.0 and hold off on upgrading the vCenter Server appliance until the next major release since the upgrade/migration tools are such horrible crap. Time to sit back and wait it out!

Update: The built-in update tool in 5.0 that allows you to apply point release upgrades is also fairly broken. (See the red “Failed to install..” message in the background?) 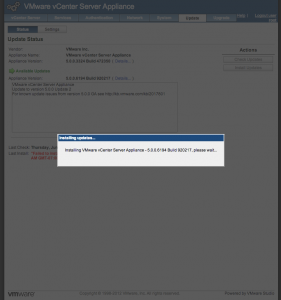 For those of you that just received this promo email… 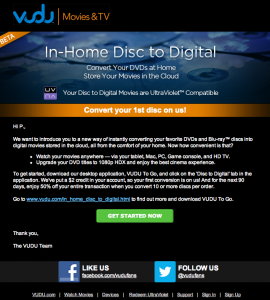 I decided to give it a try with stack of old DVDs. The promo pricing is totally reasonable, but I doubt it’ll last. (50% off when you “convert” 10+ discs, then $2 off your total.) Your existing DVD/BD titles are $2 to convert, or $5 for upgrading a DVD to HDX. For the content I successfully converted, HDX quality is great. Some big caveats to considered before jumping in, though..

I hope Amazon launches an equivalent, because I’m already committed to an Amazon content library and really, really, really don’t want to keep another vendor. If you only have a few stacks of decent titles just taking up space, though, it’s worth considering!

I just spent an annoying amount of time troubleshooting a new cap-based deploy.rb for a Rails app to a new CentOS 6.4 server. The deploy.rb worked perfectly on other systems, but something about the configuration was causing `cap deploy’ to hang during the following:

Long story short, when manually sftp’ing to the server, I’d get:

Ah ha! After taking a cue from this dude, I edited the .bashrc to redirect any output to /dev/null. I could then successufully sftp to the server manually, and `cap deploy’ magically worked as expected. The offending line was actually rvm, which of course insists on print a color-coded message when you `rvm use 2.0.0′ (or whatever). Changing the offending line to:

Most of us developer types have at least two machines we use routinely, and managing that can be a chore. Specifically, I usually want to do the following every time I sit down at a machine to hack on something:

Doing all this every time I hop to a different machines was chore, so I wrote a few BASH scripts to help. More importantly, I recently packaged them into a public GitHub and released it! Homeboy is a set of small, plain BASH scripts. After following the simply installation instructions, you just run homeboy every morning:

This will run the updates you specify, though I’ve only included the stuff I use regularly: namely brew (OSX), rvm (OSX and Linux), apt (Ubuntu), yum (Red Hat/CentOS) etc. I ask that you submit pull requests to add support for updating Perl, Python, MacPorts etc. The synchronization mechanism works by zipping the specified list of files into a .zip in a synchronized directory managed by Dropbox, SugarSync etc. “Pushing” your current set of files to Dropbox is done via:

After pushing, the next time `homeboy’ is run on any configured machine, the .zip file will be unzipped into your home directory. It’s really not complicated, but saves time by having to make the same change a bunch of times across different machines and platforms, and having subtle differences.

When using the git options, homeboy assumes you have a single directory where all your clones are kept, such as ~/Developer/git. Every subdirectory that looks like a git clone will have ‘git pull origin master’ run inside it.

Pretty silly stuff, right? But hey, all I do is run `homeboy’ every morning I plan on doing development work on a machine, and sip on a cup coffee while everything is brought up to date. 🙂

Are you Googl’ing around trying to figure out why you’re getting this error when trying to `do-release-upgrade’ your Ubuntu 12.10 system, even though you’re pretty much up to date?

I just burned a couple hours trying to figure out why I only got this error on one specific server. It turns out that it’s a bug in the version of  the ubuntu-release-upgrader-core package, and you must be pulling updates from a “quantal-updates” repository to get the fixed package when you `apt-get upgrade’. To fix this, edit your /etc/apt/sources.list and make sure you have the following two lines:

After making sure you have these lines, get yourself updated again and re-try the release upgrade script:

…and you should be rollin’ towards Raring!