The Kindle 2 is my first commitment to electronic books and e-ink screen. I silently waited until several generations of eBook readers were on the market–including the Barnes & Noble Nook–before making the decision to commit to Amazon’s Kindle 2.

The 6″ e-ink display that looks just like the paper of a novel you’d buy at the grocery store. Unlike computer LCD displays, the Kindle’s screen is reflective, making it easier you to read outside in natural sunlight, just like a real book.

The built-in keyboard is extremely useful, though a tad clunky feeling. It is built with physical buttons (as opposed to “soft” or “virtual” buttons used on devices like the iPhone), and takes some getting used to, especially when searching a book and navigating a variety of different screens and dialogs. Despite a bit of awkwardness that is difficult to verbalize, it’s invaluable to have these controls, especially for searching and note taking.

Internet
One of the coolest features is the built-in 3G cellular radio that is tightly integrated with the Kindle Store and works similarly to the “One-Click Checkout” feature offered by Amazon. You can usually download a sample chapter before purchasing, and of course “upgrading” from samples to full copies is very straightforward and easy.

For individual subscription charges you may also subscribe to a gamut of periodicals and blogs. While it may seem strange to offer paid subscriptions to content you can often view for free online, the Kindle versions of the content are repackaged to support the navigational structure and user interface of the physical devices, provided a more fluid experience when bouncing between your regular reading material.

Using the built-in keyboard and 4-way joystick-like device, you can even use a built-in web browser to surf the internet in a bind. Surprisingly, there are no monthly services charges for this ability, though the device clearly is not designed for web surfing. Even with free 3G service you’ll usually use your phone, laptop etc. instead. 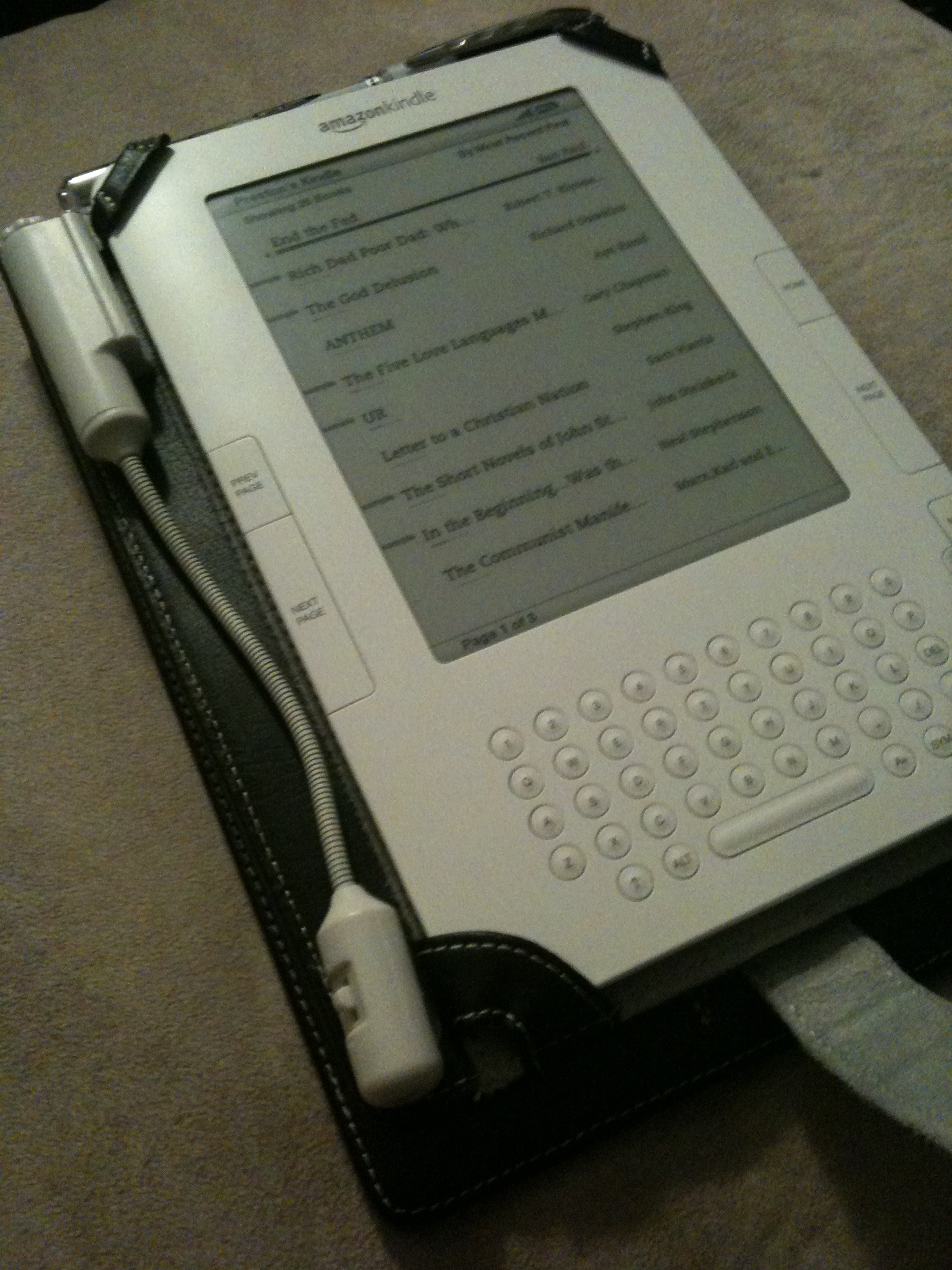 All purchases (including subscriptions) are automatically delivered wireless to your Kindle. I’ve generally found Amazon’s “delivered in less than 60 seconds” claim to be true: even when cruising through a barren Nevada desert.

You have the ability to read your own .PDF, .TXT, .MOBI, .DOC and other documents, and are provided a free service to convert your documents to the Kindle’s native .AZW format. Note, however, that .PDF files, while displayed, cannot be re-layed out to fit the size and orientation of the screen. Constantly having to zoom in and out is annoying, so you’ll often want to convert to .AZW before transferring content to your Kindle.

At time of this writing, Kindle content can be managed and accecssed in four ways, the…

Content purchased using the Kindle Store–via any of these interface–can freely sync amongst them, assuming they are all tied to the same Amazon account. After a piece of content is purchased, it is automatically backed up on Amazon’s servers, allowing you to delete it from the device today and easily restore it (even to a different device) sometime in the future.

Note that documents you load onto the Kindle (via a USB connection to your Mac or PC, or wirelessly for a nominal charge) will not be backed up to Amazon’s systems, nor can they be automatically synced between interfaces. It would be fabulous to have Amazon back up my own Kindle content, though since it wasn’t purchased from Amazon it seems reasonable to not offer this service. (Note to Amazon: I would pay for this feature!)

The text-to-voice software turns out to be surprisingly useful. Some words, as you would expect, are consistently mispronounced and a tad distracting, but not so much as to detract from its use. Using both the built-in headphone and built-in speakers, you’ll find yourself being read to in the car, walking around campus, the grocery store.. pretty much anyway you’d normally listen to music. Mispronounced words that are a tad annoying:

There is also an “experimental” MP3 player built in. It is in no way even comparable to the interface or features provided by iPods, but nevertheless a “nice to have” feature. I use it rarely since I already carry around an iPhone and use iTunes for media management.

Things you won’t be able to live without once you get used to them:

While not without its flaws–most notably slowness of the screen to update–I love the Kindle and keep it with me whenever possible. For me, the Kindle is more than just a gadget. It represents a fundamental change in the way I interact with written knowledge, and resets my expectation accordingly. I fully expect large-scale consumer transition to e-ink-style display to be rocky due to nasty web of vendors, publishers and authors all vying to dominate the market early, but for the avid readers out there, it’s worth it.

The page refresh rate of the Kindle 2’s e-ink screen is most definitely noticeable. I’m not sure why the screen displays inverted colors for a fraction of a second (perhaps it’s part of the clearing process, or just so it’s obvious that the “page” is “turning”), but the distraction is minor and you get accustomed to it quickly. Reading on an LCD (such as the iPad) obviously doesn’t have this sort of refreshing delay, however, I’d still prefer an e-ink screen over the best LCDs. I find prolonged reading sessions on LCDs intolerable, and despite the drawbacks still prefer e-ink.

The PDF to AZW conversion process generally works ok. I’ve read several long AZWs converted from PDF, and the graphics converted nicely with minor layout issues. It’s important to remember that PDFs are designed with “pages” arranging content into static layouts (whereas AZWs hold the content but do not fix the layout), so expect some minor issues here and there, especially when dealing with complex PDFs.

Also note that, as of today, Amazon has not released desktop software for Mac. It is not technically necessary, but would be very nice to have. It may be worth signing up for the Kindle For Mac notification list: http://www.amazon.com/gp/feature.html/?ie=UTF8&ie=UTF8&docId=1000464931

I have been looking and looking for info on e-textbooks, espcially college texts. The kindle is apparently catching on because one florida school is buying a ton for their school but I don’t see anywhere info on what texts are available and I don’t see price comparisons.

Do you know anything?

Wish I knew. You can buy some publisher textbooks through Amazon, but from what I gather, these beta programs required some sort of program coordination from the the college as well as the publisher. I’ve shot out a few email trying to get details, but everyone has been pretty tight lipped. Arizona State University got sued for trying the program… not sure if that has something to do with it.