The overall aiming mechanic is *very* poor. I don’t expect PC-level ease, but at least something on par with the Tom Clancy games is necessary to make a console shooter fun. Both me and my buddy commented on this suckage right from the start. AoT also suffers from poor pacing. Remember how in Serious Sam they would spawn an insane amount of identical enemies in a large space and you’d fight them off for, like, 15 minutes? Yeah… expect some of that. On the plus side, after you clear an area you’ll be treated with the gong sound ripped straight off the Gears of War disc. (Now that you have your GoW disc out, why not put it in the drive instead?)

In single player mode, your AI buddy has a severe learning disability. He doesn’t make great decisions on when/where to heal you, or even where to drag you. When told to advance aggressively, he’ll pretty much clean house while you check your iPhone email. Using the aggro meter to a planned strategic advantage is pretty much impossible. Update: That’s really only true in the easy mode or easier parts. In certain difficult sections–especially in the hardest mode–closely controlling aggro for your AI buddy is necessary and useful.

Multi-player campaign co-op fairs only slightly better. All the special BFF moves you saw in the trailer can only be done at specific, pre-defined points along IKEA-like map paths. “Step jump” is a completely useless gimick which contributes nothing to the game except to serve as a trigger to spawn baddies. The team skydiving thing is… retarded. So one person snipes from the air. Cool.. except the other person “steers”. That’s… great. Co-op sniping on the ground is also worthless. The Max Payne-esque back-to-back mode would be awesome if you could choose when/where to do it, but you can’t… sooooo, lamX0r.Overkill, feign death, weapon upgrading and the aggro meter are actually useful strategic elements. The placement of large gun turrets throughout the game was clearly done to force teamwork and render any Leroy Jenkins types useless. Periodic encounters with enemies that can only be damaged from behind also provide a clever way of leveraging the aggro system. Unfortunately, you always use the same basic strategy of “I’ll fire at his shield to draw aggro while you walk up to him and shoot him in the butt.” The repetition gets old fast.

Oh, and I swear if I see one more BFF door opening cutscene I’m eating my controller and letting my stomach acid play the game for me. You opened a door together for the 30th time! YAY TEAM!!!

Conclusion: Rent only if you’re planning on playing with a friend. Otherwise continue getting your fix with GRAW2, RS: Vegas or Gears of War.

The RRoD 360 repair process has been straightforward so far. (After all, Microsoft has certainly had an ample volume of opportunities to improve it.) The online repair form was straightforward, and my empty pre-paid shipping box arrived yesterday.

Everything needed to package the console for return was included: a plastic bag for the console, padded foam, large strip of packaging tape, shipping label, small form (in English and Spanish) and clearly written photographic instructions. Paying for door pickup would have been nice, but that’s not a big deal. I’m off to drop it off at UPS right now.

I powered on the ol’ Xbox 360 this weekend to finish Mass Effect, a feat which I was especially pumped about since I’ve been told I’m extremely close. Much to my surprise, Microsoft had left a super special, albeit slightly belated Christmas surprise up in my tubes. 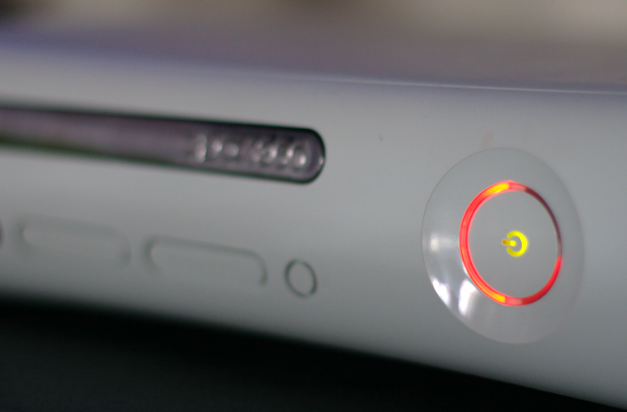 I figured I’d have some “me” time this weekend, so I picked up a copy of the highly praised Mass Effect. Saying it’s good is obvious; awesome is an understatement. Groin-grabbingly enthralling, genre-shattering entertainment is somewhere in the neighborhood. We’re talking a contender for best video game ever here. So if you’re last minute Christmas shopping for a 360 owner (possibly yourself), I can’t recommend Mass Effect highly enough.

The gameplay itself is difficult to describe. Take the fun parts of leveling, storyline, voice acting and small squad combat RPG elements from Baldur’s Gate, the pace, feel and vehicle action of a FPS squad combat shooter, and drop that into an incredibly rich sci-fi backdrop of a Star Trek episode. Awesome sauce!