I’ve previously expressed my love for the Kindle family of devices, and on a whim decided to upgrade from the Kindle 2 to the new Kindle 3G with 3G and wifi. For others contemplating the upgrade, here’s what you need to know:

Question: If I complete my general physics and mathematics studies using freely available MIT OpenCourseWare content on my own time, computer science study on campus at ASU Polytechnic, and general education requirements at UoP, all for a degree program at Berkeley, what’s wrong with that? After all, as long as I can demonstrate the competancies outlined in its program of study, isn’t this effectively more-or-less the equivalent of the Berkeley-delivered version costing possibly 10x more in total? Good for me… right? And if so, who cares?

Answer: Hundreds of years of authoritative people vetted in an aggrandizing aristocracy of exclusionary education. That’s who.

Universities best interests are not necessarily aligned with those of students, and as DIY U explores, the differences can be disheartening to the point of infuriating. Given a long-established tradition of prestigue through extreme selectivity and absurd financial requirements, it is understandable that many universities are struggling to find their way in the Information age.

I enjoy looking at political issues though numbers, statistics, historical analysis, and really any sort of empirical evidence lending insight to the world around us. With regards to education, it is obvious that we have yet to fully realize how Internet-enabled technologies fundamentally change how we should perceive learning, and due to the explosive growth of exploratory online systems it is critical we define realistic paths to evolve traditional, costly, centralized, campus-oriented, course-based university programs to the increasingly decentralized, affordable, online, multi-national, outcome-based demands being pushed by current generations of students. DIY U investigates this gap using historical evidence, anecdote, current statistics, and critical analysis: exactly the type of writing I look for in subject matter of high debate.

Of particular interest to me are the many statistics on past, current, and projected future costs of higher education. Not that this should be shocking, but the gist is that the current model just isn’t going to work if we really want to positively improve the general education level of the American population. (And I think the whole world would nod in violent support of this goal.) Simply using federal subsidies to (attempt to) expand an already antiquated model of education would be outright foolish.

I also particularly enjoyed the sections on different paradigms actively being used to varying degrees of success, specifically outcome and competency assessment-based learning. I’ve attended four higher-ed schools to date, and find the requirements of having to take specific course line numbers at a specific college for a specific degree program within a single university in the 21st century to be unacceptably, and quite literally, “old school”. As someone who’s said “I could have tested out of that class” numerous times, the concept makes sense to me.

If you find these topics interesting, by all means pick up copy of DIY U: Edupunks, Edupreneurs, and the Coming Transformation of Higher Education. I purchased my Kindle version for about $10 on Amazon.

Meltdown: A Free-Market Look at Why the Stock Market Collapsed, the Economy Tanked, and Government Bailouts Will Make Things Worse

My rating: 5 of 5 stars
Meltdown is a evidence-based, academically credible, and brutally honest analysis of the causes and effects of economic depression faced in the United States since the early 1900’s. Thomas Woods’ almost adversarial opinion of the Federal Reserve is approached via many different approaches and data sources, as is his affinity of Austrian business cycle theory. (As opposed to Keynesian economics primarily seen in the U.S.)

For those with interest in macroeconomic theory or the effects of government intervention on both business and individual finance, this is absolutely required reading. Those with politically libertarian leanings will also find many of the facts presented within outright shocking. I personally finished the electronic version of this book with over 10 pages of highlights, and plan to continue following Woods’ work.

View all my reviews >>

I recently received a review copy of slide:ology – The art and science of creating great presentations by Nancy Duarte, published by O’Reilly Media. I’m consciously making an effort to increase my frequency of speaking engagements, so I was thrilled to see a modern text on visual aids from a heavy usability-oriented angle. I’ve read the first two chapters so far and skimmed the majority of the remainder.

slide:ology is cleverly designed to read and flow like a presentation itself, although the content is far more in depth than an ordinary slide deck. Each of the 275 pages is a pleasure to look at, and the individual page designs themselves provide a great deal of inspiration. I’m particularly thrilled to see such creative use of negative space and negative geometry in many of the designs. Many texts on marketing effectively use the exact opposite approach.

Overall, slide:ology is a great little piece of speaking inspiration by Nancy Duarte. Great job! (I expect more like this.)

Apple announced this morning that the NDA preventing developers from holding open development discussions will be lifted. While details of the new agreement are not yet available, we are already beginning to see changes in the iPhone development landscape. Details on the first Phoenix iPhone Developer Group meeting will be announced tomorrow morning on the OpenRain blog!

Publishers are also rejoicing, as many have been effectively sitting on completed books in anticipation of today. iPhone SDK Development by The Pragmatic Programmers is already available for immediate electronic download, and an O’Reilly representative has informed me that O’Reilly Media has just released iPhone Forensics. 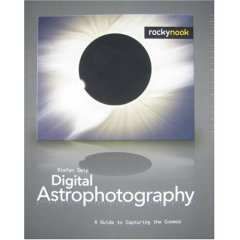 Rocky Nook — a digital photography book publisher in California — sent me a review copy of Digital Astrophotography: A Guide to Capturing the Cosmos for review, which I read over the last few months.

The Pragmattic Programmers are now shipping print copies of Programming Erlang: an outstanding introduction to the interesting new Erlang language for concurrent programming. Peeps who bought the PDF can download v1.1 here.