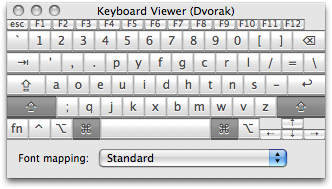 Today marks exactly seven months from the day I switched to the Dvorak keyboard layout.

Hey, was browsing around having had a look at journeta. Spotted your note about win32 switching to and from Dvorak. If you enable the layout as a second language / input option, you can switch to and from that using SHIFT+ALT on XP, and 2003, with the language toolbar enabled.

Thanks for the note! I’ll have to enable that on all OpenRain’s Windows VMs 🙂