Preston Says: I asked Dan McClary for a big favor recently: use his general UNIX knowledge and graduate-level statistics voodoo to produce a report highlighting performance characteristic differencess between OpenSolaris ZFS and Linux RAID5 on a common, COTS hardware platform. The following analysis is his work, reformatted to fit your screen. You may download the PDF, HTML, graphs and original TeX source here.

The following is a description of results obtained benchmarking I/O performance for two OS/filesystem combinations running identical hardware. The hardware used in the tests is as follows:

Basic I/O testing is conducted using bonnie++ (version 1.03a), tiobench (version 0.3.3-5), and a series of BASH-scripted operations. Tests focus on I/O throughput and CPU usage for operations either much larger than available memory, and very large numbers of operations on small files. All figures, unless otherwise noted, chart mean performance with 2% deviation for large-file operations and 5% for small-file operations. These bounds well-exceed the 95% confidence interval, implying a range of high significance.

In dealing sequential reads and writes, particularly of large files, the Solaris/RAID-Z1 configuration displays much higher throughput than the Ubuntu/RAID-5 combination. Latency and CPU usage, however, appear to be higher than in the Ubuntu configuration. The reasons for these disparities are not determinable from the tests concluded, though one might venture that the management algorithm used by ZFS and each systems caching policies may play a part. 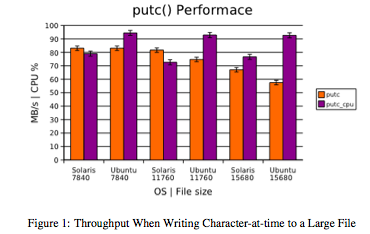 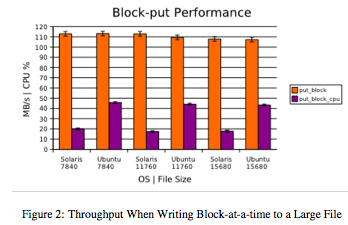 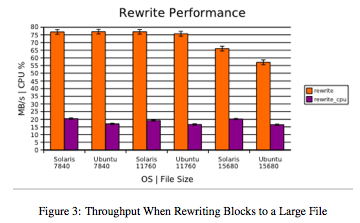 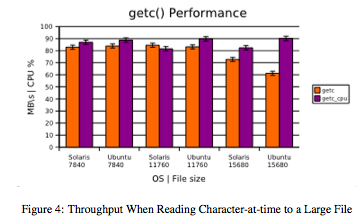 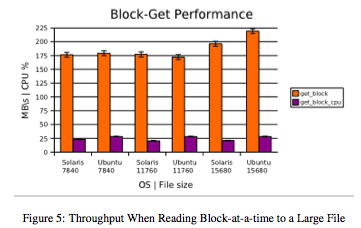 Figures 4 and 5 illustrate throughput and CPU usage while reading large files in the bonnie++ suite. Generally, results are consistent between platforms, with the Ubuntu configuration showing a slight edge when reading 15,680MB files (though with an associated drop in CPU efficiency).

tiobench results for random reads and writes given in Tables 3 and 4 show the Ubuntu/RAID-5 configuration displaying both higher throughput and greater CPU efficiency. However, these results seem somewhat questionable given the results in section Â§3.

In examining the performance of both configurations on small files, both in the bonnie++ suite and from shell-executed commands, the most obvious statement that can be made is that the Solaris configuration displays greater CPU usage. This, though, may not be indicative of poor performance. Instead, it may be the result of an aggressive caching or other kernel-level policies. A more detailed study would be required to determine both the causes and effects of this result. In each test, 102,400 files of either 8 or 4KB were created. 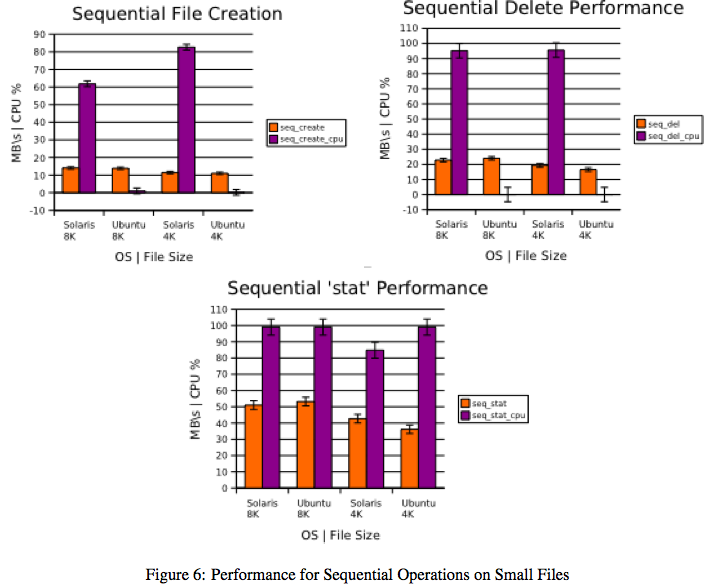 Figures 6(a)-6(c) and 7(a)-7(c) illustrate bonnie++ performance for both configurations. In contrast to the tiobench results, the Solaris configuration generally displays slightly higher throughput (on the order of 1-2MB/s) than its counterpart. However, as previously noted, CPU usage is much higher.

Finally, Tables 5-6 lists measured times as given by the standard Unix command time when measuring command execution. In these results, there are some surprises. The Ubuntu configuration performs somewhat faster when executing a large write (using the command dd). However, the Solaris configuration is much faster when dealing with 100,000 sequential 8KB files. For reference, all file creation is done via dd, copying by cp and deletion by rm.

Few overarching conclusions can be drawn from the limited results of this study. Certainly, there are situations in which the Solaris/RAID-Z1 configuration appears to outperform the Ubuntu/RAID-5 configuration. Many questions remain regarding the large discrepancy in CPU usage for small-file operations. Likewise, the Ubuntu/RAID-5 configuration appears to perform slightly better in certain situations, though not overwhelmingly so. At best, under these default configurations, one can say that overall the Solaris configuration performs no worse, and indicates that it might perform better under live operating conditions. The latter, though, is largely speculation.

Indeed, from the analyst’s point of view, both configurations show reasonable performance. The desire to deploy either configuration in an enterprise setting suggests that significant-factor studies and robust parameter designs be conducted on, if not both candidates, whichever is most likely to be deployed. These studies would provide insight into why the discrepancies in current study exist, and more importantly, achieve optimized performance in the presences of significant uncontrollable factors (e.g. variable request-load).

Preston Says: Thanks for the outstanding work, Dan!

[…] Back at RailsConf a couple months ago, there were a few presentations that made an interesting case for considering OpenSolaris instead of Linux. I had never really considered Solaris much before then. When we got back, one of my friends, Preston Lee, really wanted to dig into it to find out more. He got a buddy that’s a Ph.D. candidate to put his research hat on and compare OpenSolaris ZFS vs. Linux ext3 RAID5. […]

Good read. I did a similar test way back with bonnie++ comparing stripe size on software raid5 with Solaris9’s SVM. But it wasn’t as good of a read as this. 😛

I wonder what the results would look like if the ext mount was set with noatime,nodiratime options. There’s a very real performance increase and a nice little debate over at kerneltrap: http://kerneltrap.org/node/14148

That’s a great question, Scott. If I ever get back to running these sorts of experiments I’ll definitely try turning off atime updates.

Also note that the OS X Leopard Snow Leopard Server is alleged to have full ZFS support. Now if only they had a decent expandable disk system to go with it!

Commenting late. If an expanded measurement is run, it would be nice if it also included relatime,nodiratime. The “relatime” option updates the atime if and only if the previous atime is older than the mtime or ctime. This lets programs that depend on atime (like mutt) work correctly, but it skips most atime writes. A nice compromise between functionality and performance.

I use relatime,nodiratime on my software raid-5.